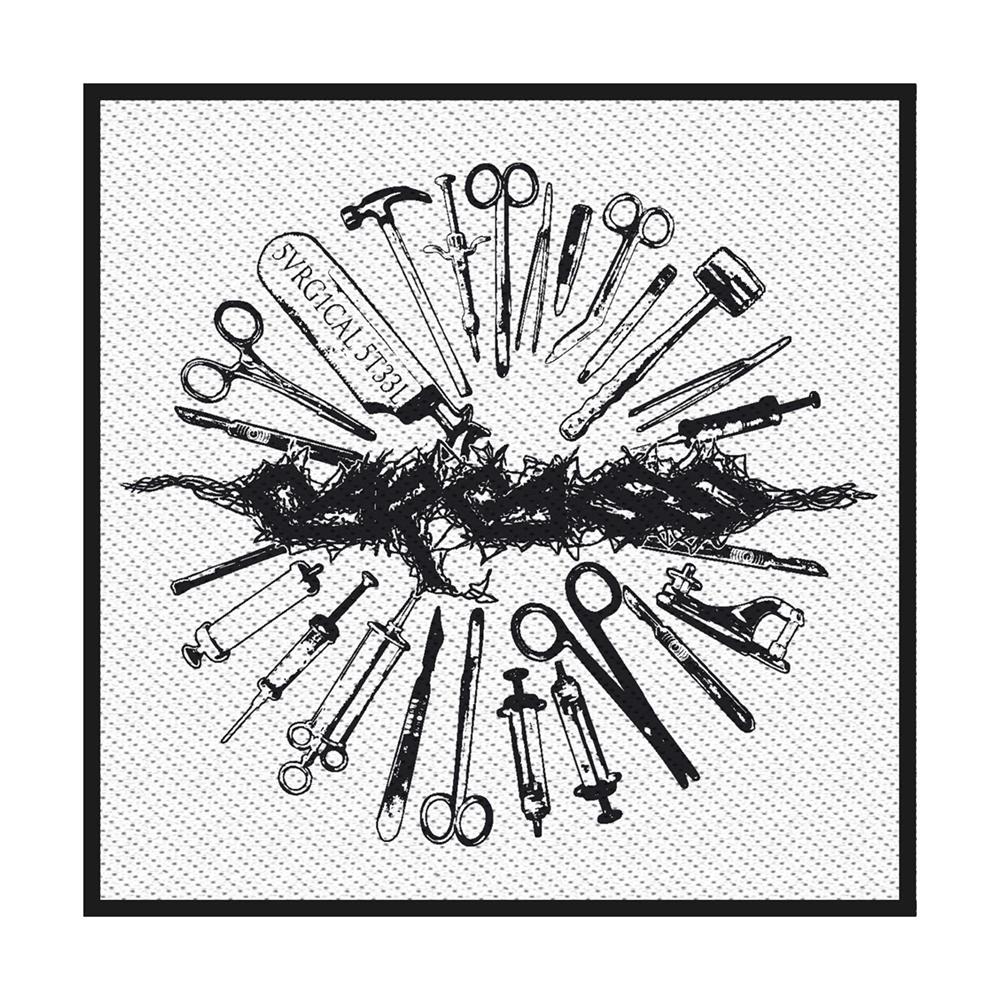 Carcass are an extreme metal band from England, formed in 1985 and disbanded in 1995. A reunion was enacted in 2008 without one of its original members, drummer Ken Owen.

Although widely regarded as pioneers of the grindcore genre, their early work was also tagged as "splatter death metal", "hardgore" and "goregrind" on account of their morbid lyrics and gruesome album covers.

Carcass was formed as a D-beat band by guitarist Bill Steer together with drummer Ken Owen in 1985 under name Disattack. After releasing demo A Bomb Drops... in 1986, Paul (bassist) and Andrew Pek (vocalist) of Disattack left the band and was replaced by vocalist Sanjiv and bassist Jeff Walker, formerly guitarist and vocalist of the Electro Hippies. About that same time Bill Steer joined Napalm Death (replacing Justin Broadrick) and recorded the second side of what became ND's first album, Scum (1987). Walker also designed the cover art of that record.

The band had then changed its name to Carcass. In April 1987, they recorded the Flesh Ripping Sonic Torment demo, the only Carcass recording featuring vocalist Sanjiv, who left shortly after. Walker and Steer shared vocal duties for debut album recording, which was done in only four days. Despite the primitive production values of Carcass's debut, Reek of Putrefaction - something the band was very displeased with[5] - it became a favorite of Radio 1 legend John Peel.[6] Due to his interest they were asked to participate in their first Peel Session, in 1989, where they debuted new material for the second album. The Peel Session was released as an EP with the band members adopting pseudonyms: K. Grumegargler, J. Offalmangler, W.G. Thorax Embalmer.

Heartwork, released later in the year in 1993 was considered a radical change by many fans,[citation needed] eliminated Steer's deeper vocals and the clinically gory lyrics. Again, Steer handled all rhythm guitar duties to help gain consistency between the many layered guitars that built Carcass' best production to date. Song structures, whilst still containing musically complex parts, were simpler, in some cases using the verse/chorus/verse formula.

After the release of Heartwork, Carcass received a worldwide deal with Columbia Records, who hoped for a commercial success, even suggesting that Jeff Walker learn how to sing. Fan reaction was split between the charge that Carcass were no longer playing death metal at all and appreciation of the technical accomplishment the album shows.[citation needed] In fact, today some credit Carcass with being a very early founding influence for not just one, but two genres of metal - grindcore (or, more specifically, goregrind), and the modern melodic death metal sound. Michael Amott left the band right after Heartwork was recorded and was for a while replaced by Mike Hickey who was later replaced by Carlo Regadas.

During the summer of 1994 Walker remixed the track "Inside Out" for a Die Krupps remix album, although the version stayed fairly true to the original with the exception of Owen's drum samples from Heartwork replacing the Die Krupps original, and additional mixing from Walker and Colin Richardson at Parr Street studios (where Heartwork was recorded).[citation needed]

Carcass now set about writing songs for their major label debut. During the December 1994 UK tour Carcass showcased two songs from their current writing sessions - "Edge of Darkness" and "Firmhand", both showing a more straight forward song writing approach than on previous efforts.[citation needed] Around this time, "Edge of Darkness" was recorded for the BBC Radio 1 Rock Show sessions - a session which could be found on later compilation albums.[citation needed]

By late 1994 17 songs were ready and the band set about using their $200,000 advance to record the album, again with Colin Richardson, at Rockfield studios in Monmouth, South Wales in early 1995. During the 6 week recording schedule the record label began to withdraw support, stating that they (Carcass) were not ready to record and needed to write more songs. This advice was ignored, as was the suggestion to have Terry Date (Pantera, Prong etc) 'remix' the album, and the band continued. At the time, Jeff Walker stated in an interview with the UK's Metal Hammer Magazine that the album was taking more of a classic rock approach, with drums, bass and twin guitars à la Thin Lizzy in comparison to earlier 'multi-layered guitar' productions. This has since been put down to Bill Steer's unwillingness to perform the time consuming guitar layering (as once again Steer handled all rhythm guitar) through losing interest in the metal genre.

During the Swansong recording sessions, Carcass were asked to remix a Björk track - "Isobel". This wasn't a remix as such but more of a re-recording with only Björk's vocals remaining. All rhythm guitars were handled by Steer, and the track saw light of day in March 1996 on Björk's "Hyperballad" single.

Due to continuing record company problems with Columbia/Sony causing the album to be delayed from late Summer 1995 to June 1996, in which time Carcass moved back to the Earache Records label and broke up before even releasing Swansong. The move back to Earache was dubbed by Walker as "the second great rock and roll swindle" (Kerrang! - June 96) as they had effectively been paid twice for the same album.

Swansong, which featured twelve of the seventeen tracks put to tape during the recording sessions, drew some criticism from fans for its melodic riffs which in some ways bordered on late 1980s thrash. This last official album also incorporated more melodic elements ("Tomorrow Belongs to Nobody", "R**k the Vote") and some doom metal elements ("Don't Believe a Word").

The album only featured twelve of the seventeen songs recorded in the Swansong sessions (or thirteen on the original brain shaped edition with the bonus disc). Kerrang! reported in June 1995 that prior to Swansong's release, Carcass would be releasing an EP featuring two tracks from what would be Swansong and three songs from the sessions that would not make the final LP. However, this EP was never released, most likely due to the lack of record company support for newly recorded material.

Walker has since stated in interviews that all seventeen songs should have been included in a double album, and that some songs omitted from Swansong were actually stronger than some of Swansong's actual content.

Carcass also remixed (i.e. re-recorded but kept the vocals of) Killing Joke's "Democracy", although this time Carlo performed all guitar duties as it is thought Steer had quit the band by early 1996. The Carcass "Rooster" Mix was made available on Killing Joke's Democracy, and if it were not for the vocals, would not be out of place on Swansong.

Around the time of Swansong's release, Carcass informed the press that Carcass were to call it a day without even a farewell tour, but most fans had guessed this may be the case via the album title.

The album sold well, staying near the top of the 'Indie Rock Chart' in the UK for several months above bands such as Placebo despite having no touring support from the band. It is rumoured that the band were offered several lucrative tours in 1995, such as supporting Iron Maiden on their "X-Factour 95" which had the album been released as expected in 1995 could have improved the band's sales and longevity.

A posthumous compilation, Wake up and Smell the... Carcass was released in October 1996 to collect together Carcass' rarer material. This included the five Swansong session songs that did not make the final Swansong album, four tracks from the 1994 Radio 1 Rock Show session, the two Heartwork EP tracks, the non-album tracks from Tools of the Trade EP, and the tracks from the Pathological and Grindcrusher compilations respectively.

An accompanying video was released a few weeks after the Wake Up CD with little knowledge from the band or their management (Point Blank Management). The video, later released on DVD, featured five of the band's promotional videos, a show from the Grindcrusher 1989 tour (as a three piece) and a show from the 1992 Gods of Grind tour. Sound on the two live shows is poor, particularly the latter which Walker has described as 'unmixed'.

In June 2006, in an interview with Walker, he discussed the possibility of reforming Carcass, but it was unlikely that Owen will participate as he cannot replicate his former drumming proficiency due to his health problems.

In September 2007 it was announced by Michael Amott that he is rehearsing with Bill Steer, Jeff Walker and Daniel Erlandsson (replacing Ken Owen, who is incapable of playing a full set with Carcass due to health reasons) in secret to rehearse old Carcass songs for a possible reunion tour. The original plans were to play at several festivals during the summer, but they couldn't meet the deadlines. [1]

On October, 2007, Carcass were confirmed to play at German heavy metal festival Wacken Open Air and Finland's Tuska Open Air Metal Festival in 2008.[2] Carcass also embarked on a reunion tour which started June 6, 2008. Including Wacken Open Air and Tuska Open Air, Carcass played at Hellfest Summer Open Air, Metalcamp and several other festivals. In mid-2008 the band announced a tour of Australia and New Zealand and a North American tour which took place in September and October, 2008.

On November 15, 2008, Carcass headlined Danish Metal Awards held in Amager Bio, Copenhagen, Denmark. This was the only chance for fans to see Carcass in Denmark, as Denmark is not part of the official tour 2008. Bill Steer also presented the award for Best Danish Debut Album which went to SCAMP - Mirror Faced Mentality. Carcass played a tight, very well sounding set and surprised the audience bringing Ken Owen to the stage where he gave a brief drum solo to show how far he has come recovering from his illness.

Carcass performed an Exclusive UK show at the Damnation Festival in Leeds, Jeff Walker hinted at the time that the Damnation performance may be their last ever show. It was the first time Carcass has played in England for 14 Years.

Carcass also re-released their entire back catalogue with bonus material over 2008 on Earache Records.[7] When asked if the band were planning on writing and recording a new album, Steer replied:
“ I would be very surprised if that would really happen. But never say never, I’m always the last one who needs to be convinced. Michael and Jeff are much more busy with those things than I am. I’m also not very much involved in the planning of all the festivals which are scheduled. At this moment, I barely know in which countries we’re all going to play. ”

— Bill Steer, Voices from the Dark Side[8]

The Carcass reunion show schedule continued in 2009; a North American tour was done in March 2009.

Carcass also headlined the Bloodstock Open Air in Derbyshire, England in August 2009. During the show, fireworks went off during a drum solo, and the band stated they were there due to being made a very good offer to play.[citation needed]

In 2010 they will headline Vagos Open Air in Vagos, Aveiro, Portugal on August 6[9] and Jalometalli Metal Music Festival held in Club Teatria, Oulu, Finland on August 14