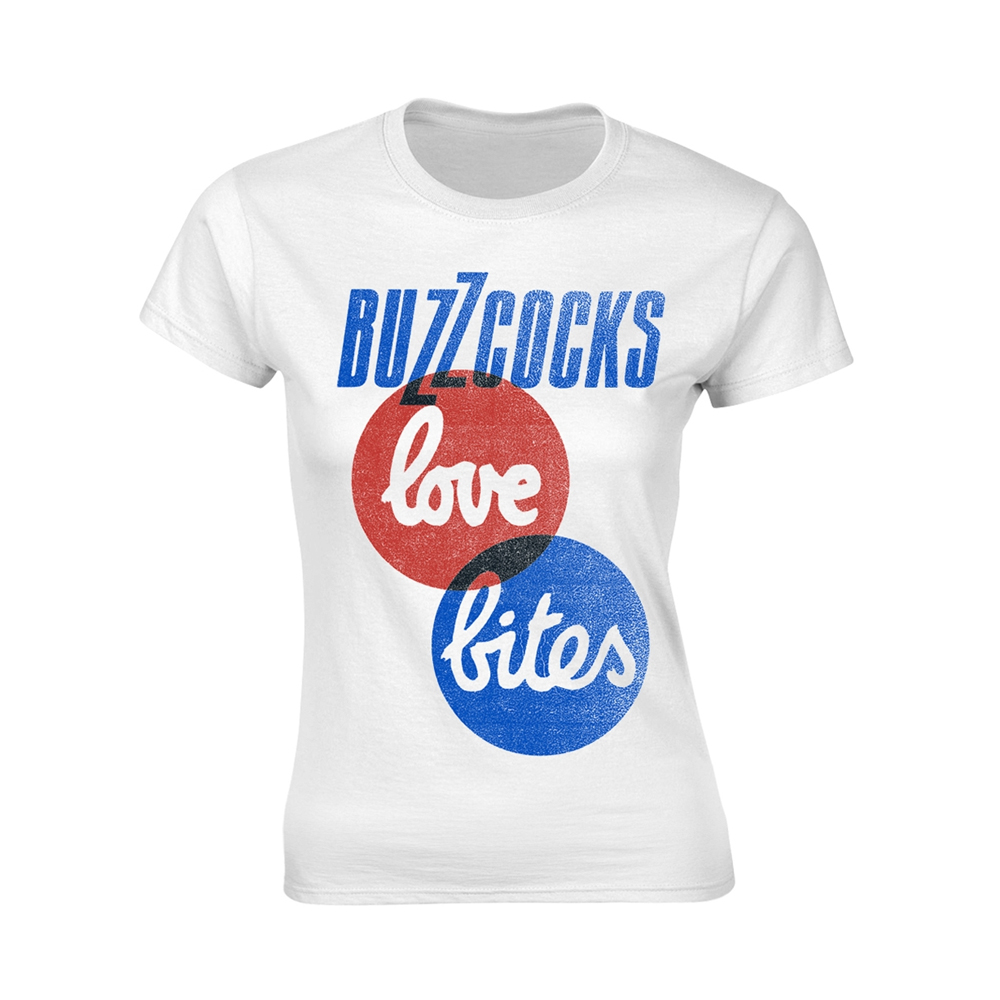 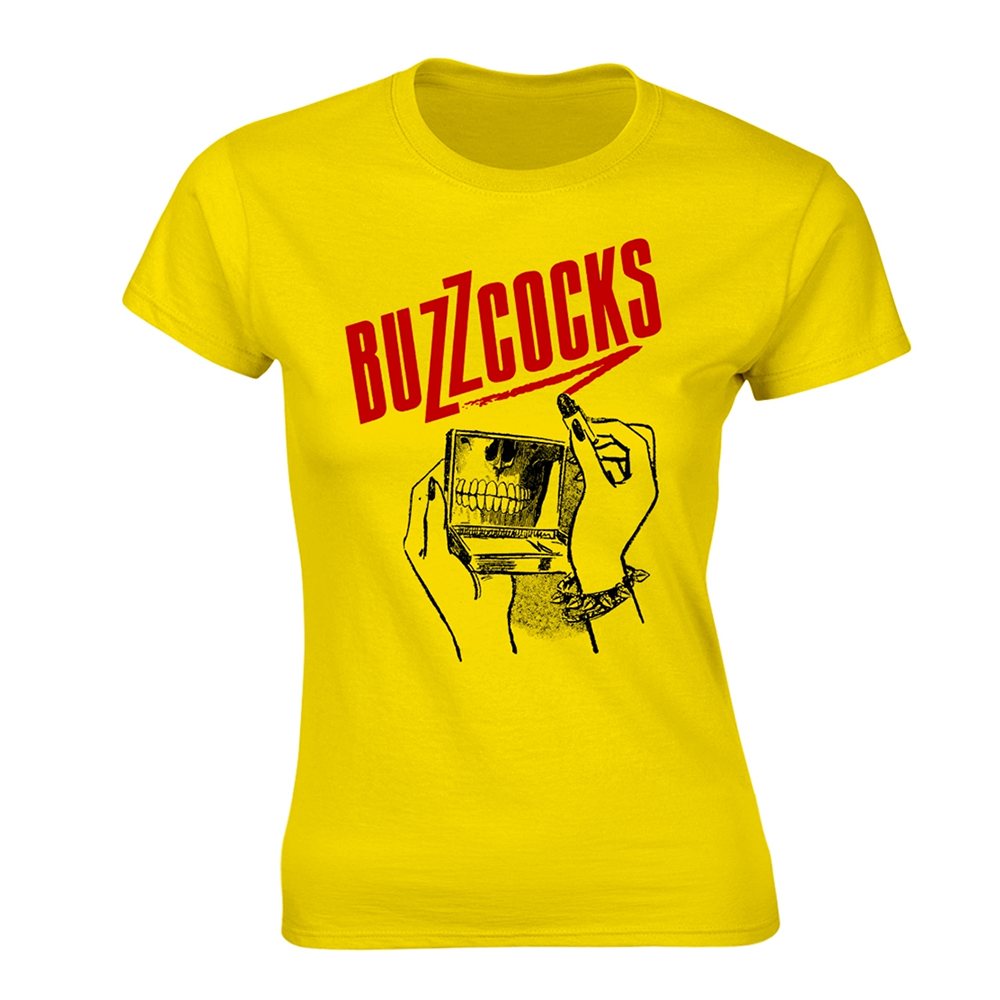 THE BUZZCOCKS: The band was formed in 1975 by guitarist/singer Pete Shelley (real name Peter McNeish) and singer Howard Devoto (real name Howard Trafford), both students at Bolton Institute of Technology (now the University of Bolton). They shared common interests in electronic music, the idiosyncratic work of British musician Brian Eno, and American protopunk groups like The Stooges. In late 1975, Shelley and Devoto recruited a drummer and formed an embryonic version of Buzzcocks that never performed and which dissolved after a number of rehearsals.

After reading an NME review of the Sex Pistols' first performance, Shelley and Devoto travelled to London together to see the Sex Pistols in February 1976. Shelley and Devoto were impressed by what they saw and arranged for the Sex Pistols to come and perform at the Lesser Free Trade Hall in Manchester, in June 1976. Buzzcocks intended to play at this concert, but the other musicians dropped out, and Shelley and Devoto were unable to recruit other musicians in time for the gig. Once they had recruited bass guitarist Steve Diggle and drummer John Maher, they made their debut opening for the Sex Pistols' second Manchester concert in July 1976. A brief clip of Devoto-era Buzzcocks performing The Troggs "I Can't Control Myself" appears in the Punk: Attitude documentary directed by Don Letts. In September of 1976 the band travelled to London to perform at the two-day 100 Club Punk Festival, organized by Malcolm McLaren. Other performers included: the Sex Pistols, Subway Sect, Siouxsie & the Banshees, The Clash, The Vibrators, The Damned and the French band Stinky Toys.

By the end of the year, Buzzcocks had recorded and released a four-track EP, Spiral Scratch on their own New Hormones label, making them perhaps the first punk group to establish an independent record label. Produced by Martin Hannett, the music was roughly recorded, insistently repetitive, and energetic. "Boredom" announced punk's rebellion against the status quo while templating a strident musical minimalism (the guitar solo consisting of two repeated notes). The demos recorded while Devoto was in the band were later issued officially as Time's Up. Long available as a bootleg, this album includes the alternative takes of all the tracks from the Spiral Scratch EP as well as early version of tracks that later appeared on the official debut Another Music in a Different Kitchen.

After a few months, Devoto left the group; he returned to school for a year, then formed Magazine. Pete Shelley continued as vocalist; his high-pitched, melodic singing stood in stark contrast to the gruff pub rock vocal stylings of many punk contemporaries. Diggle switched from bass to guitar, and Garth Smith joined on bass; due to Smith's alcoholism, he was quickly replaced with Steve Garvey. This new line-up signed with United Artists Records.

Their first UAI Buzzcocks single, "Orgasm Addict", was a playful examination of compulsive sexuality that was (and remains) uncommonly bold. The BBC refused to play the song, but the single sold well. Later, more ambiguous songs staked out a territory defined by Shelley's bisexuality and punk's aversion to serious examination of human sexuality. The next single, "What Do I Get?" reached the UK top 40 charts. "Lipstick", the B-side to "Promises," shared the same ascending progression of notes in its chorus as Magazine's first single, "Shot By Both Sides," also released in 1978.

Their original career consisted of three LPs: Another Music in a Different Kitchen, Love Bites, and A Different Kind of Tension, each supported by extensive touring in Europe and the U.S. Their trademark sound was a marriage of catchy pop melodies with punk guitar energy, backed by an unusually tight and skilled rhythm section. They advanced drastically in musical and lyrical sophistication: by the end they were quoting American writer William S. Burroughs ("A Different Kind of Tension"), declaiming their catechism in the anthem "I Believe", and tuning in to a fantasy radio station on which their songs could be heard ("Radio Nine"). In 1980, Liberty Records signed the band, and three singles were released. However, only one of these, the double 'A' side "Why She's A Girl From The Chainstore/Are Everything" made the Top 75.

After recording demos for a fourth album the group disbanded in 1981, when Shelley took up a solo career. Diggle formed the short-lived Flag of Convenience, who released an EP in 1982. Shelley and Devoto teamed up in 2002 for the first time since 1976, producing the album Buzzkunst, a play on the German word for 'Art'. The album was a mix of electronic music and punk.

Buzzcocks have reformed several times since 1989, featuring Shelley and Diggle with other musicians; initially with Maher and Garvey for a world tour, then briefly replacing Maher with Smiths drummer Mike Joyce. In 1993, Tony Barber joined on bass and Phil Barker on drums. This line-up toured on one of Nirvana's last-ever tours in 1994, and in 2003, toured with Pearl Jam. In April 2006, Barker left and was replaced by Danny Farrant. In March 2006, the band released their eighth studio album, Flat-Pack Philosophy, on Cooking Vinyl Records, the supporting tour found them playing on a leg of the mid-2006 Vans Warped Tour.