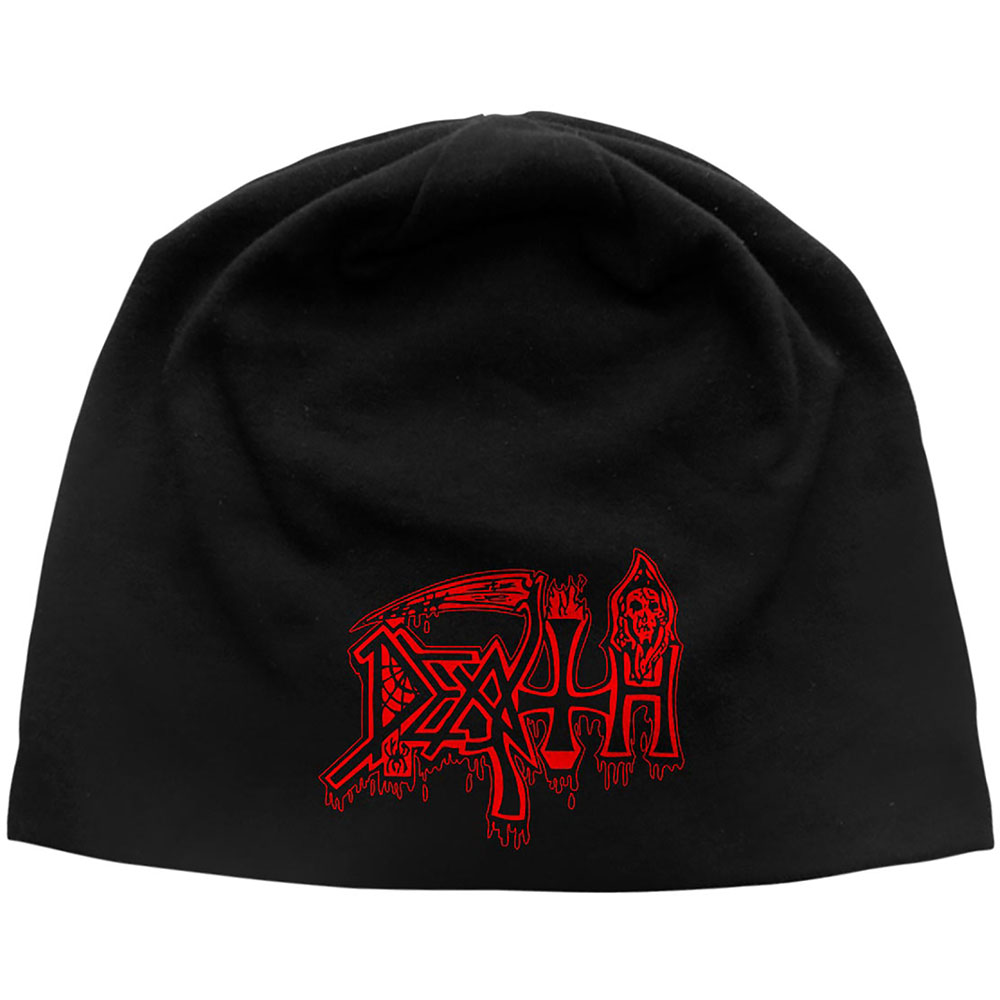 Unquestionably one of the most important and influential death metal acts to have ever emerged from the North American continent, Florida's DEATH came together in late 1983 when guitarist/vocalist Chuck Schuldiner and guitarist Rick Rozz (real name: Frederick DeLillo) got together with drummer/vocalist Barney "Kam" Lee to form Mantas. Drawing musical inspiration from Venom and Slayer, the trio (no bassist had yet entered the picture!) went about composing original tunes and making very rough, crude rehearsal recordings to send out to various tape-traders around the world. Out of these sessions came a completely unproduced five-song "demo" entitled Death By Metal (mid-1984), which --in spite of its primitive nature-- ended up establishing the group as one of most promising contenders for the American death metal throne, a status that at the time was being firmly held by San Francisco's Possessed. The recognition they received, however, was not enough to help Mantas along in their hometown of Orlando, where the group were still not being taken seriously by any of the clubs or fellow musicians.

"The local situation was fuckin' nearly impossible," Schuldiner later recalled. "A lot of people looked down upon us. We got a lot of shit from the local band scene; all the bands from around (Orlando) thought we were pure shit. We were noisy back then, but we were putting out brutal death metal, and it was too much for people to comprehend." This complete lack of local support for the band's music was at least partly to blame for the constant internal turmoil within the group and Mantas' eventual break-up in late 1984.

Vowing to carry on making music that was "faster and heavier" than anything he'd done before, Schuldiner immediately announced his plans to form a new band -simply called DEATH- and relocate to either Tampa or California after his 18th birthday (which was to occur in May of 1985), a move that he felt could improve his chances of securing a stable line-up for the group. Within weeks, however, Chuck reconciled with Rozz and Lee and commenced the writing sessions for what would become the legendary Reign Of Terror demo.

We have gotten so much heav"ier (since reforming), it's almost beyond comprehension," Schuldiner stated on the eve of the demo's recording. Laid down over a five-hour period during October 1984 "in the back room of a music store where they keep recording equipment", Reign Of Terror cost a grand total of $80 and was never properly mixed down due to a lack of time in a proper recording studio. In spite of this, the six-song tape was circulated worldwide through the vast tape-trading network and put DEATH on the map as one of the genre's most extreme and brutal groups.

On December 30th, 1984, DEATH performed with local Tampa heroes Nasty Savage at Ruby's Pub and made an audio recording of the show that they would later release as an "official" live tape. "We're going to trash the (Reign Of Terror) demo, because it sucks compared to our live tape," Chuck was quoted as saying at the time.

1985 Three months later, on March 9th, 1985, Chuck, Rick and Kam finally got the opportunity to record a "proper" studio demo, a three-song recording made specifically for the purpose of finding a record deal. Not an "official" demo release, the Infernal Death tape (as it would later become known) was to be the last recording made with this line-up, as Chuck slowly grew apart from the other members and began to set his eyes on a Michigan bassist by the name of Scott Carlson (then of Genocide, and later of Repulsion).

"Scott sent us a tape of himself jamming, and he absolutely kills," Chuck enthused. By the time Scott relocated to Orlando (replacing Rozz), he brought along with him Genocide guitarist Matt Olivo, and the two joined Kam and Chuck in a short-lived incarnation of DEATH that ended when Lee finally exited, leaving the remaining three members drummer-less. Several frustrating months followed during which Chuck, Matt and Scott atempted to find a replacement for Kam, but the task proved impossible, ultimately causing Scott and Matt to return to Michigan and leaving Chuck the daunting task of finding an entirely new line-up.

In September of 1985, Chuck relocated to San Francisco at the urging of ex-D.R.I. drummer Eric Brecht, and the pair soon hooked up in yet another version of the band, this time with the intent of their band "being the fastest ever". Ultimately, however, Chuck realized that a full-speed assault did not allow for the different musical shades and colors which made DEATH such an import muscial entity, and in December of that same year, he returned to Florida, bandless once again. It was around that time that he got a phone call from Toronto death metal upstarts Slaughter, who -just a few short weeks prior to entering the studio to begin recording their debut album, Strappado-- asked him to move up to Canada and join their ranks. Frustrated with his local environment.

1986 Chuck accepted their offer and in January of 1986 moved to Toronto to start rehearsing with the group. Although initially enthusiastic about the prospect of being in an actual "band", Schuldiner quickly realized the need to pursue his own vision and not follow somebody else's lead, and promptly left Canada to return to Florida, where he started plotting his next attack. Within weeks he was back in San Francisco where he hooked up with a promising young drummer by the name of Chris Reifert, and in April of that same year, the pair entered a California studio to record the infamous three-song Mutilation demo. By far the best-recorded tape Chuck had laid down up until that point, Mutilation rapidly made the rounds in metal circles, and the demo soon found its way in the hands of Combat Records, who proceeded to snap up the group to a multi-album deal.

In July of 1986, Chuck and Chris entered a Florida recording studio to start work on their debut album for the label, but due to various technical problems, the sessions didn't go past the initial basic tracks and the whole project was moved over to Hollywood's Music Grinder Studios. Paired up with producer Randy Burns, DEATH spent only a few days recording the LP before Chuck and Chris returned home, leaving Randy to mix the album. While waiting for the album to be mixed and mastered, Schuldiner and Reifert came in contact with a young Californian guitarist by the name of John Hand, whom they welcomed in the band, even going so far as to have his photo included on the back cover of the upcoming record. It was a decision that would later haunt the group, as Hand would leave the group prior to the recording of their second album and thus never recorded so much as a single note with DEATH.

1987 Released in May of 1987, DEATH's debut record Scream Bloody Gore was immediately met with praise and accolades, with magazines and fans hailing it as one of the most important death metal releases of all time. However, with Chuck once again having returned to Florida and Reifert basing himself in San Francisco, Schuldiner --in yet another surprising move-- decided to join forces with three-fourths of Florida's Massacre (including Rick Rozz). This marked the first touring incarnation of DEATH, which made its first major live appearance at that year's Milwaukee Metalfest. During the successful club tour that followed, DEATH aired three brand-new numbers ("Born Dead", "Open Casket" and "Pull The Plug") that Chuck had written for the group's sophomore outing, which showcased a more mature, focussed direction for the band while retaining the brutality that had become the group's trademark.

By April of 1988, DEATH had returned to the recording studio (Tampa's Morrisound facility) and, under the guidance of Dan Johnson, laid down their much-anticipated second album. A polished-yet-savagely-heavy effort, Leprosy, like it's predecessor, had its roots firmly in the Slayer/Venom/Hellhammer school of songwriting, but with an increased emphasis on the kind of melodic passages that would later become central to the group's sound. Not surprisingly, this powerful combination was an instant "hit" in the metal underground and became a major influence on hundreds of bands that emerged during death metal's "resurgence" in the late '80's, including groups such as Entombed and Napalm Death (who ended up recording their Harmony Corruption album at Morrisound Studios in an attempt to recapture Leprosy's distinctive production).

Although the DEATH line-up would change once again, the band had made an indelible impression with their first two releases. Indeed, it was albums such as Leprosy that help to forge a path for the hundreds of death metal bands which would soon rise in subsequent years, although none of them would be able to erase the importance nor savagery of tracks such as "Pull The Plug". The fact that some of these songs remain fan favorites even to this day speaks of their time-tested craftsmanship and the importance of the band, not only in the American metal scene but with an impact whose influence would soon be witnessed throughout the world.

An appearance at the Ultimate Revenge II video shoot (a live video/CD which also included Dark Angel and Forbidden, among others) took place in October, 1988, followed by more touring through much of 1989. By the end of that year, the volatile relatiosnship between Chuck and Rick had gotten virtually intolerable for Schuldiner and a parting of the ways became inevitable. "Rick was basically kicked out of the band due to the fact that we were all into progressing as a group and getting better as musicians, and he simply was not," Chuck was quoted as saying a few months later. "He was stopping me from writing the kind of material I wanted to write due to his inability to play the songs, and we all knew it was time for a change."

1990 In Rick's place, DEATH enlisted James Murphy, a Florida resident who'd previously spent time in Agent Steel and Hallows Eve, and began work on the all-important third album, entitled "Spiritual Healing". Produced by Scott Burns, Spiritual... represented yet another step forward in Chuck's quest towards incorporating an increased level of musicality into the group's songwriting, while at the same time shying away from the Satanic and low-budget gore movie-type lyrics that were becoming commonplace in the genre. "I think that Spiritual Healing is very much representative of what death metal can sound like when it's done with strong emphasis on musicality and less so on hyper-speed and stupid Satanic lyrics," Chuck said after the album's release. "We believe that we can turn a few more people into death metal with this record and change a lot of people's minds about what death metal is supposed to sound like."

In spite of some of the early criticism from the die-hard death metal fans who viewed the musical progression on Spiritual... as a negative one, the album went on to be a highly successful one for the group, with DEATH doing more touring and in front of larger crowds than ever before. Unfortunately, it also marked the last time the group would record with this line-up, as pressure in Chuck's personal life and internal band disagreements caused Murphy to be dejected from the group first, followed by drummer Bill Andrews and bassist Terry Butler a few months later.

In the decade that followed, DEATH issued several more critically-acclaimed releases while gradually gravitating towards a much more technical musical approach, one that would inevitably alienate some of the group's longtime fans. Along the way, Chuck came to be rightfully regarded as one of the pioneers of the death metal genre, while Spiritual Healing came to earn its place in the annals of death metal history as one the finest albums ever released under the banner.